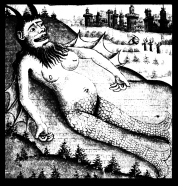 The @pesci.strani is an artist collective formed during the 2020 “universal” quarantine period due to the outbreak of covid-19. These artists gathered together in order to creatively respond to this new situation of emergency and their body of work is exhibited online via their public page on Instagram. Here follows a brief sample of each member’s artworks.

Be careful, this is a fraud!

Let me start with the confession that there do not physically exist five different members of this collective but just one, me. You may assume that I wanted to deceive you or that I needed to create for myself some imaginary friends. Both are partly correct and partly wrong at the same time.
I like to think of it as a performance. But in this case, as the poet said, it’s “a drama divided into people instead of into acts.” Some could argue that anything we do can be considered a social performance. And since -when online- none of us have a physical existence that is of any great matter, where’s the difference?
All of you, artists or not, are constantly trying to build one identity for yourself to live by. Why do you think that you are any better than those of us who have managed to have several identities or maybe none? After all, if I were only one, all of these photographs, sketches, videos, and pieces of clothing probably would have never been created. It wasn’t me, it was the @pesci.strani!
All of them at the same time parts of me as well as parts I never could play.

Instagram -being one of the most popular forms of social media- is widely used to communicate and share images. Many artists choose to distribute their art to reach a wide audience through Instagram, even more so now during this lockdown.
It has never been so easy to see this many artworks gathered together, and it has never been so easy to ignore them. It has never been so easy to reach a wide audience and it has never been so easy to remain unnoticed and lost.
Fast-art: a rabble of poor (or very expensive) images waiting to be ignored. I personally find it extremely liberating. But everything comes at a cost, or so they say. A whole army of algorithms -especially hired to eradicate the bums, the pussies, the peckers and the nipples of this world- are waiting to be deceived.
Could maybe the idea of small press use this channel and live through it? On the one hand, there may be paths to skip the market’s managers but one the other hand, creativity is threatened to be acid-washed by the trends and the options. But after all, the small press was never about best-sellers, it was always about sharing things that spoke to you and may speak to someone else too.
Either way, the pesci strani used this channel during the covid-19 lockdown – a period during which they could neither print anything nor meet with others. Garnet sketched on their clothes interpreting their daily experiences, Douranto trifled with classic literature and porn -not being able to tell them apart, Latipa kept on being non-productive, Griséli -not being able to smartwork-  shared some of their memories and Untorrre managed not to get fined.

If they (people) were to cease to understand either themselves or others, if the forms of their communication were to become suspect to them, and the natural unnatural, then at least the terrifying dynamic would come to a standstill. To the extent that the last works of art still communicate, they denounce the prevailing forms of communication as instruments of destruction, and harmony as a delusion of decay.

Ideas (nowadays) are threatened with “banning” not because so says the traditional censor,
but because they are considered non-profitable by the genteel manager.

-Small Press on the contrary of Cultural Industry

The poor image is no longer about the real thing—the originary original. Instead, it is about its  own real conditions of existence: about swarm circulation, digital dispersion, fractured and flexible temporalities. It is about defiance and appropriation just as it is about conformism and exploitation.
In short: it is about reality.
-Hito Steyerl, In Defense of the Poor Image

Antonis Douroudis‘s  artwork is also exhibited within the following sections of our Spring 2020 Show: