memory makes us
memories make us

they are stored via fragments

my memories
a (greek) child’s memories

a place full of memories and senses

as C. Nadia Seremetakis describes in her paper “The memory of the senses”:
“the garden aroma combined with the animal dung;
the oregano bunch hanging over the sheep skin containing the year’s cheese;
the blankets stored in the cabinet which combine rough wool with the humidity of the ocean;
the oven exhuding the smell of baking bread and the residue of the ashes;
the fresh bread in the open covered with white coton towels.”

the wood stove
where she cooks
where we all gather around

a symbol of collectivity
a core for the whole family

the memory of the stove
fragmentation of the memory

in fusing the ethnographic and the biographical, I focus on everyday life,
and the symbolic and affective dimensions of material culture
as passageways into those experiential fragments and emotions

nothing is sealed for the sake of preserving

parts that were stationary and insignificant,
detached from their natural environment

they rewrite the past and edit it with new experiences

creating an alternative world of memory 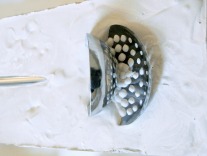 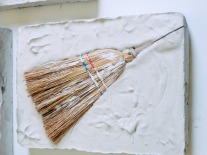 freedom cannot exist without the boundaries

even if they are set by yourself or by others

but in the end what you get is freedom

they push me, they want me to confront them
so to reach freedom

that’s how my creativity emerges

to reach freedom I have to pass these boundaries

but I always had the craftsman inside me

that’s how I made the passage to the three dimensions

boundaries now are more tactile,
more touchable for me

For my midterm project I decided to expand my Multi-sensory Materiality project.

Main source of inspiration was a part of the text of a five acts paper of C. Nadia Seremetakis called “The Memory of the Senses: Historical Perception, Commensal Exchange and Modernity”, first published in September 1993.

The paper is all about the deep relationship between the greek grandmother and her grandchild.
The grandmother has been a central and ubiquitous figure in the popular imagination representing the anomalous persistence of the past in a present that has not superseded it. 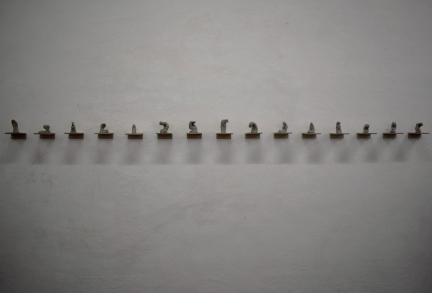 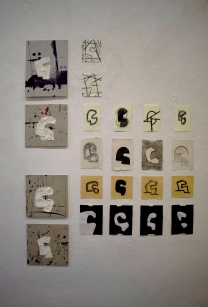 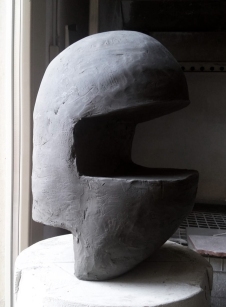 Text:
The grandma dressed in black, sitting at home or at the edge of the fields, feeds the baby. The baby in the cradle or on her lap is wrapped tightly in strips of cloth. She takes a piece of crustless bread, the inside of the bread known as psiha crumbles it with her fingers and puts a few crumbs in her toothless mouth. The tongue rotating moistens the bread with saliva till it becomes a paste, “clay”. She molds the bread till its texture signals that it is ready for the child. She takes the bread from the her mouth and places it in its toothless mouth. The baby swallows it as she swallows her saliva flavored by the bread. Her fingers reach for more bread and the act is repeated. On other occasions she dips the crumbs first in olive oil before molding them with her saliva. She talks and chants to the baby, calling to it: “my eyes”, “my heart”, “my soul”, “my bread loafs” (frajolitses mou – when referring to the pudgy white legs), “my crown”. She continues till the baby sleeps, both waiting for its mother to return from the fields.
This absolutely segmented story managed to excite all my five senses in an internal nostalgic way. Outcome of this feeling were the 15 ceramic figurines.
For my final piece i decided to create a ceramic based on my grandmother’s figure as I remember her by memory sitting in her small stool in front of the stove when we go to visit her in the countryside. Through sketches I tried to find the outline that pleases me and then replicate it into a 30 centimeters height ceramic figure.
Working on this project was a pleasure because here in Siena I don’t have the chance to see my grandmother and made me more sentimental than I expected cause I recognized how truly important is her authentic presence.

For my Tempo Zulu Project I had as initial two words.
The words “container” and “contained”.

Siena with its external wall is like a “container” where a strong background of history and culture (Contrade, the Palio, Art) is “contained”.

Aris Konstantinidis, a notable architect of modernism in Greece, was referring to his works as “life containers” (Greek: δοχεία ζωής).

This is what Siena looks like. A container full of life.

Thinking of which is maybe the first figure of a container, I stepped into the ancient Greek amphora (Greek: αμφορέας).

The result is a composition of rocks that mold the walls, not completely, letting the passengers that pass by to complete them in their own will. 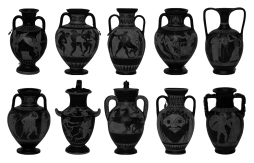 In the midst of the economic, social and artistic boom of the city, a new expansion of the walls started in 1290, which incorporated the whole of the southern part of the city up to the existing border walls. The door, also known as Maremme, was opened in the city in 1325- 1326 and strengthened in the 16th century. However, the 16th century fortifications were demolished in the 19th century, to get the square Biringucci and expand the way to Grosseto.

Two things caught my attention when I visited Porta San Marco.
The first one was the fact that I could see the different phases of the construction of the Porta and the walls. The remnants of the first phase, the new material that came to complete the demolished part and the additions that were made throughout the years. All these together create a jigsaw puzzle that consists of highly complex pieces.

The second one was the very strict and clean lines of the construction that attach solidity to the Porta.

What I tried to do is a reproduction of the demolished walls, wanting to eliminate the absolute shape of the construction and bringing back, in some way, the ruins of the old walls. 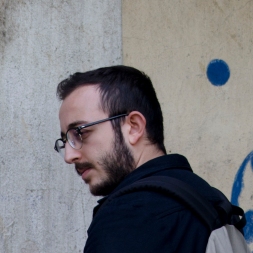 I have been studying architecture at the Aristotle University of Thessaloniki for four years and counting. In those years, I have attended lessons such as engraving, sketching and drawing. I have also participated in a workshop focused on wood in ECOWEEK 2015 in Thessaloniki and I displayed some of my work in CHEAPART Athens 2016. With two of my classmates we received a commendation for our project on creating green oasis in the cities, a contest organized by WWF GREECE in 2017.

I have always been keened on Art. From an early age I have shown a distinct interest in Arts and Crafts, wanting to give shape and form to things with my own hands. I am interested in how textures, both visual and tactile, conflict and interact with each other, the feelings they evoke to the individual and how the individual reacts to these feelings.

I am Kyriakos Papadopoulos.