Artist Statement:
Excavation of experience tethers the unknown and known. In the space of their relation, a third way of knowing emerges. One initiated by the aesthetic. I dwell between and within the splits of embodied experience: in/out, subject/object, blindness/insight, sacred/profane.
Topologies of vision, memory, and desire transfix the human subject within invisible circumscriptions, embedded within the ground of images. These often curious and arbitrary stains on consciousness impose themselves in the public formation of history and identity. The inter-generational trauma wrought by collective suffering speaks to me with radioactive potency. Radioactivity, in an expanded context, refers to the unseen but keenly felt presence of traumatic events in everyday life.
Bearing witness to histories otherwise denied and repressed opens the possibility for the cry of testimony to disrupt cycles of collective subjugation and suffering. My studio praxis circles around my own subjective sight on and within these splits, as informed by Lacanian psychoanalysis, trauma theory, and sociopolitical engagement.
Through itinerant actions of sight and hand, repetition transforms the arbitrary into an ardent search for veneration. The use of found objects connects me to the hidden personal histories and traces of time within materiality. I return to textiles and painting as two foundational expressions of human creativity, one binding and wrapping the body, the other enveloping sight. The weaving together of contemplation and action guides me in a nurturing meditation on the convergence of memory, experience, and image.
.
Final Project: Carnaio
Carnaio translates a visceral encounter with a site in the Santa Maria Della Scala complex. The title refers to the historical function of the space- a pit wherein the remains of bodies were thrown and layered with lye. The resulting stratification of bones and earth is now visible, though several other pits remain buried beneath the hospital. Still and shocking, the space evokes a palpable absence. The “unknownness” of identities, bodies, lives which confronts the modern visitor is countered by an almost primal connection to what are clearly human bones. The remains are felt before they are seen. Carnaio exists between this space of reverence and repulsion. 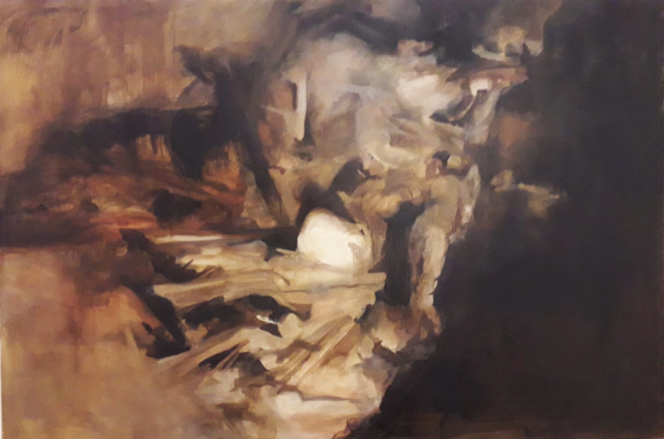 What is art for you? What do artist do? What is the purpose of art?

Art is powerful- it makes overt the tensions within our own sight. I loved how Jerry Saltz wrote, “Art is a bridge to a vision and art is the vision.” In a sense, art creates spaces of possibility from which to see the world, but art also is the world. It is both the container and the contained. I think, in a way, art is a non-human thing that humanizes us. It is simultaneously necessary and without purposiveness. It is hard to live as an awakened person, speaking to Alfredo Jaar’s comments on the darkness of the time in which we live. And yet, darkness has always existed. Art bears witness to the heaviness of life while generating new life (and light) itself. Art can kick, it can embrace, it can escape us, it can teach, it can comfort. Art breaks systems and it heals. I think artists are saviors. At least they saved me, from being consumed by consumption, from losing my childhood. When I started to make art, I began to understand myself as a whole person rather than a lot of compartmentalized shards. It wasn’t therapeutic, it wasn’t comfortable, but it was my salvation.

Cast explores the relation of body to earth, place and absence. I was inspired by the plaster impressions of the incinerated body cavities from Pompeii, as well as the form of a fetal figure. I saw a poetic connection between the shape of the body in this position and Siena’s Piazza del Campo. While painting, I began to discover mark and tone as a means of describing form while maintaining a level of ambiguity. The earth which creates a ground for the painting was taken from the track of the Palio.
Title: Cast
Materials: Oil paint, medium, earth 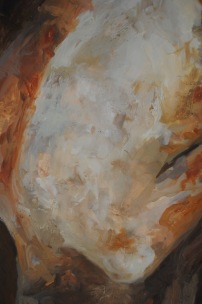 My book grew out of a particular walk inspired by a waking dream state. I wanted to play with the super-imposition of site specific drawing, symbolic imagery, and fluid continuity of thought.

Reading Response: Rebecca Solnit “The Blue of Distance” and “The Shape of a Walk”:

Though distinct, the two essays by Rebecca Solnit relate to one other in the intersection of desire and distance. I could imagine her retelling of Marina Abramovic’s and Ullay’s walk along the Great Wall as an anecdote in either essay; for it is both about the act of walking and the poignant realization that what is gained and what is lost upon arrival are intertwined. “The Blue of Distance” in it’s pacing and movement through personal anecdote, art history, and prose, takes on the character (or shape) of a walk. Solnit’s assemblage of thought develops within in the readers periphery, much like the way vision unfolds our passage through the world. In my own life, desire and distance have collided in the practice of pilgrimage. Walking through sequences, often of spiritual or historic importance like the Stations of the Cross in Bologna, or the Via Francegina, remain as passing remembrances of my desire to close the distance between myself and knowledge or spiritual revelation. Often my walks, like those Solnit writes about or herself took toward Antelope Island, have not realized my deepest desires, rather they have rendered the ordinary more meaningful. Just as Solnit quoted Allan Kaprow, “They will discover out of ordinary things the meaning of ordinariness. They will not try to make them extraordinary but will only state their real meaning. But out of this they will devise the extraordinary.” What a truly sacred desire- to close the space between the ordinary and the extraordinary, through ordinary means.

As the preserver of a collective memory, or history, of the city of Siena, the city archives exist in a contentious space in-between public and private. They are situated in the heart of the old hospital, on the border of the Piazza del Duomo, hovering above a space in which countless visitors come to admire the wonders of the city.The archives not only house masterworks in civic display, but they are privy to the quiet unfolding of human experience over centuries of tragedy and transition on the Memory Storehouse’s shelves. The files of the “Esposti,” or abandoned children, struck me as particularly poignant- how many remembrances are encompassed in those quiet folios?
My visit to the archives caused me to consider more deeply the human practice of collecting and preserving memories, or archiving experience. Where does the truth of reality lie? On the great shelves of ancient libraries heavy with texts? Or in the footsteps of a passing pilgrim? The practice of cataloguing memory becomes even more problematic, not because of what we remember, but of what we forget. Forgetfulness, in its power to obscure, distort, and bury history, shapes the shelves of the archives too. Redactions, absences, and stains structure our orientation to reality as much as any trace bits of documentation.
Archives also form an edifice of information and concepts, which reminded me of Nietzche’s description of the Columbarium in “Truth and Lies in a Nonmoral Sense.” Like a honeycomb of bees, ever building upwards, constructing and filling cells, humans continually construct an edifice of concepts in order to attempt to categorically understand reality. The practice of archiving, labelling, sorting experience dangerously threatens to erase critical distinctions in history: no two stories, two lives, two moments are the same. Yet, in order to understand them, we must file them away in the storehouse of memory. Here, they are transformed into something other than memory, they become metaphor. For Nietzche, truth is a,
A movable host of metaphors, metonymies, and; anthropomorphisms: in short, a sum of human relations which have been poetically and rhetorically intensified, transferred, and embellished, and which, after long usage, seem to a people to be fixed, canonical, and binding. Truths are illusions which we have forgotten are illusions- they are metaphors that have become worn out and have been drained of sensuous force, coins which have lost their embossing and are now considered as metal and no longer as coins.” And so, these metaphors which we have forgotten as such lie hidden on the very surface of our language. For the archive (columbarium) to be remembered, we must do the impossible task of seeing the distinctive nature of every moment, object, life. In other words, there is no space in which we can pass through without stumbling across the memories which are buried there.
With these meditations in mind, I remembered a public intervention I saw 2 years ago in Rome, the Pietre D’incampio, or “Stumbling Stones.” These golden cobblestones are small but monumental memorials placed at the residences of Jewish people deported in the midst of the Holocaust. They exist all across Italy and Europe, living quietly amongst cities in continual transformation, testifying to the events which history would rather forget. In a sense, they are a public archive, connecting countless lives through the horror of shared experience while maintaining the particular identity of each person.
In the spirit of the Stumbling Stones, my Tempo Zulu stone seeks to intervene into a public space between the city archives and the mosaic steps of the Duomo.
The inscription is as follows:
Who can find a proper grave for the damaged mosaics of the mind,
where they may rest in pieces?
The quote is from L.L. Langer’s “Holocaust Testimonies,” a seminal text in the field of trauma theory. While there is a coincidental connection between the Stumbling Stones holocaust history and the context of the quote, I have chosen it because it encompasses a broader dilemma within memory itself. Rather than seeing the practice of archiving as adding to a fixed columbarium of official categories and clear distinctions, what if we were to conceive of archived memories as mosaics? Mosaics like those which beckon the pilgrim on the steps of the Duomo- embedded in history themselves, crawling with fossils. 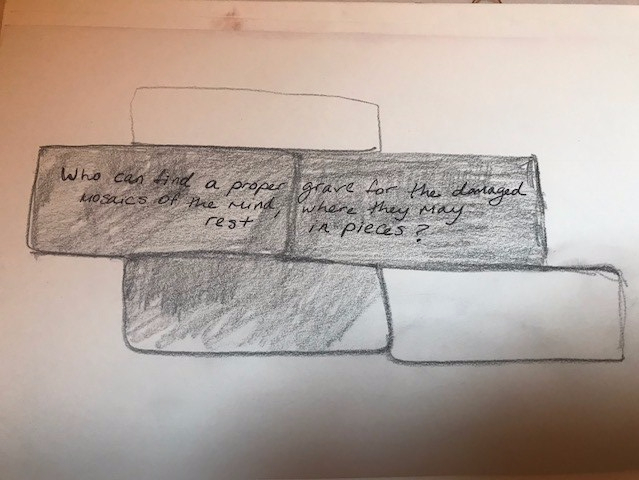 Interrupting my everyday awareness, the Walk of Destiny repositioned me within the still new context of my life in Siena. In following the arbitrary patterns of directions, I arrived as the uninvited, eavesdropping guest at a choir rehearsal. Listening from the threshold, I was neither inside the chapel, nor wholly outside- rather, the communing of strangers stopped by the music created a new “inside” in which I was immersed. My walk reminded me of the importance of awakening wonder and listening closely to its devotional rhythm, even as the task of daily living carries on. 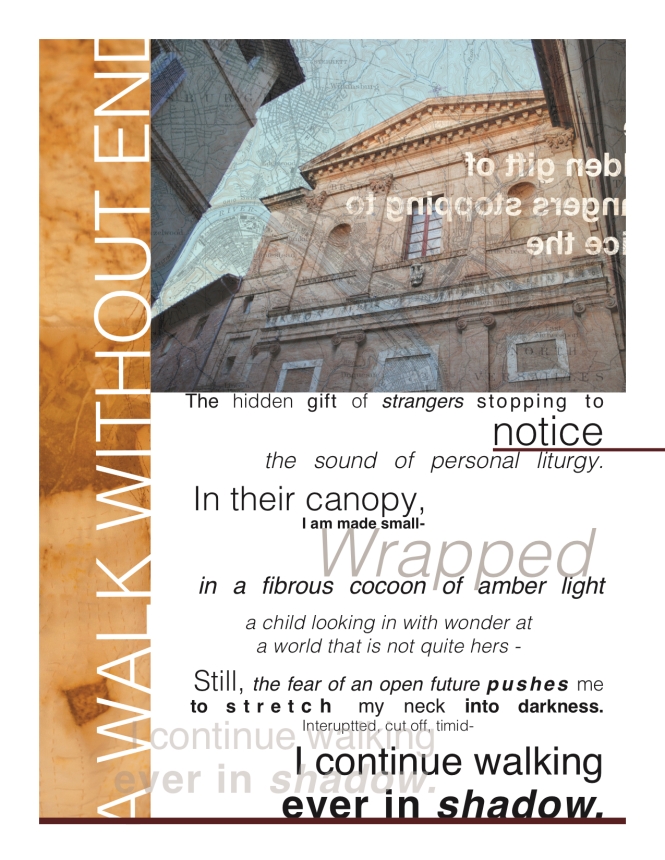 Kate Brock, USA
Bio statement:
Ciao! My name is Kate Brock. I am a recent graduate from Messiah College, with a BFA in Studio Art and a concentration in 2D studies. My work focuses on an interdisciplinary excavation of meaning from sites of everyday occurrence. I am interested in the links of connection between the sacred and profane, repressed histories, aesthetics, and psychoanalysis. My orientation as an artist grows out of my deep curiosity and love of learning, which has been informed by my work in educational spheres such as the Mattress Factory Contemporary Art Museum and Union Project, a restorative justice seeking arts center. Abroad, Italy fundamentally shaped my artistic understanding, after I studied in an intentional living community in Orvieto. While at the SAI, I hope to develop a rigorous painting practice grounded in the intersections of culture and history so vibrantly present in Siena. 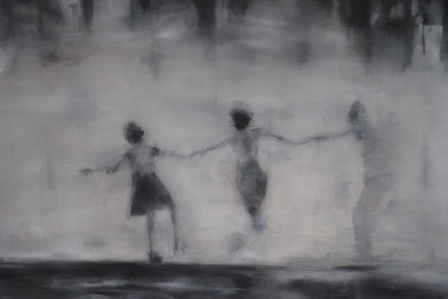 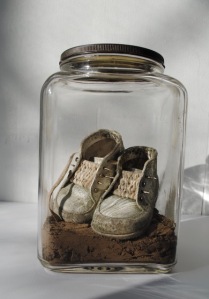 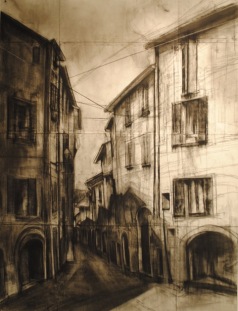