Final Project:  MEMORY OF A PLACE THAT NEVER EXISTED

This sound installation aims at contradicting a vivid personal memory of the present, to a distant, also vivid, but collective memory of the past. This work deals with the constant change between presence and absence of a place where people very much used to create community. Even though now, it is a place of mere, fast exchange.  It emphasizes the loss of identity. Like a small child who lost his mother in a very crowded place—a futile attempt to regain that which had been valuable once.

It feels like it is without doubt that art can change the world because it does. Whether we want it or not artworks affect thought, perspective and inevitably people. People make societies, cities countries and so on. The urge to criticize tragedy and horrors, the need of an artist to change things should be very careful exactly because it can change the world. Empathy and exhaustive  research are very important. Participation and active help is more. It is very true that art spaces in hard times tend to stand their ground, as in those spaces ideas are very contagious and so the environment is better understood. I do believe in young artist but only because i believe in people. Another proof that i am a bad writer.

Art is one of the many lenses that you can examine life through,as it forces you to perceive the environment in a particular way. It has been proven very difficult to define this particularity and i feel like this is what makes it special and separates it from other departments like science. Even though it is not the only way of understanding  it is probably one of the most interesting ones we have found. “Art is optional. Art is necessary. Art is never as simple as you think it is.”?

The opportunity to talk to people, share stories with them and listen to theirs.

Fountain within the San Niccolo’ complex:

At the Lizza park:

A place from people by the people. A place that everyone knows where it is. Maps show it. People can hear it from far away. Sometimes it defines your schedule. But its not always visible cause it is not always there. Meet me at the market, where culture appears and disappears each week. Were trading, smelling, bargaining, pushing, touching, hearing, yelling, tasting, talking ,caring takes place only if u are not an hour or two late. I Wonder where the markets go when they disappear.

Response to Rebecca Solnit “The Blue of Distance”

I would love to speak about the color blue~ a color caring so many symbolisms and interest. From religion to art ,society ,civilizations ,nature, blue has always been important .I would love to speak about ancient gods , its place as a symbol of knowledge ,Yves Klein , blue as the color that thrives in darkness and emptiness even how the blue of the sky and the water inspired civilizations to accept this color as their own. But what really makes “The Blue Of Distance” interesting is that it describes a desire strong enough to set people off to a journey. The idea of people deeply desiring what was once theirs but now lost , something that is new to them and therefore not yet discovered  truly or something so far from their reach that they feel comfortable in the thought that they would never reach , indicates that what makes distant mountains and lands beautiful is not this faint color but the desire of being and not being there itself.

A passport, an official document issued by a government, certifying the holder’s identity and citizenship and entitling them to travel under its protection to and from foreign countries.

I have a friend , who very much likes to define himself as a craftsman and not an artist . It is not because he would prefer to be a craftsman and not an artist , as he very much desires to make art. He is just too good with materials that he feels like his conceptual perception is left behind in a way. My aspect is that ,not only his work is art and  has conceptual interest , but also it “caries” things that are as valuable as a great epiphany. His work is not only perfect in design, color, shape, execution but also caries his thought process , sometimes a mini-game between practical and non practical ,but most importantly his work caries the aesthetic and the perception of the world around him.It is therefore a very valuable historical but also artistic monument of the modern times. Of course that does not mean every craft is considered to be art. As long as a piece is not presented as art i think it is not constructive to attempt such an approach. Under any other circumstances we just have to inspect the work from an artistic point of view and decode its artistic values. 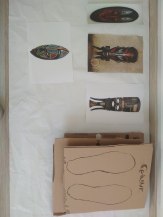 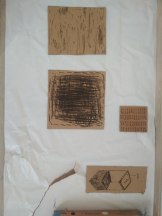 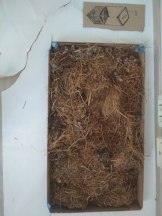 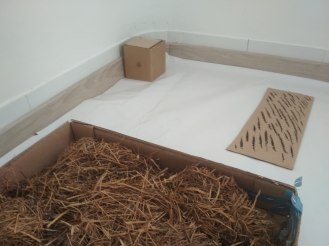 At first i did a small research about the Zulu tribe but i didn’t move on with using what i found. Then there was a small game with texture and how it could be curved on the stones. I quickly realized that the theme was more about the conceptual approach of time and space. So , the first attempt was a small block that was “breaking the rules of the project” as it comes out of the floor, to the third dimension , but in order to not affect the act of walking it is placed very close to a wall .  The next attempt is about time. I tried to depict a clock that constantly turns back as soon as it gets to a certain point. However the image of the clock that i created contains a game. The clock can be read horizontally or vertically so that as you read , you can only perceive the passing of time in one direction. After that there was only one thing still stuck on my mind .Walking around Siena had me thinking about the soil beneath the heavy stones that cover it’s streets. The idea of a soil sample inside the city walls ,placed in front of the museum of natural history, was motivated by my need to appreciate the feeling of earth. Also the mix of soil and hay indicates a part of the city’s culture and history.In the end  the only thing that was left for me to do was a “simple” game of hopscotch.

Walking is a continuous , simultaneous,steady but very diverse action that allows the person to explore ones environment   in varioys ways but also his inner thought and self. In the text there are many references ti Bhuddhist and shaman ways (the latter appear also as the very first performers since they express religion and society trough body , sound etc)of using walking as a tool for thinking and achieving spirituality(also many zen koans could apply to that).Marina Abramovic as written in the text is the artist most related to those references. She also very much includes time in her work. Time and space are very much related to walking since you are crossing both of them as you walk. RIchard Long connects space ,time, walking and art as his work is very much about the past.In that way time takes a primary role in his work about walking. To sum up walking ( like writing) is a very simple but interesting activity which we rarely think about and which could be a very good bridge between present , past , future and the ‘space’ among them.

In my walk inside the city of Siena i found very important the fact that i was really affected by my luck and fate.As soon as i accepted that there was nothing left than embracing the fact that the process was something that was there for me to see and not to judge. For that reason i chose to describe my path and thoughts exactly as they were at the exact moment and rely on that luck for a surprise! And indeed the walk very close to the cathedral but the descendance after it , the end of the destination where i found myself inside a group of elderly people who were exploring the city felt very close to what i was hopping for. In order for others to experience what i did i presented the thoughts written across the room so that people had to “walk with me ” in order to read the text . Finally what never leaves my thoughts is my city and its characteristics and how they differ from Siena’s. So the idea was to put some sounds from Athens’ streets inside the room. (I also tried to sketch the city while walking and changing perspectives as a different project ) 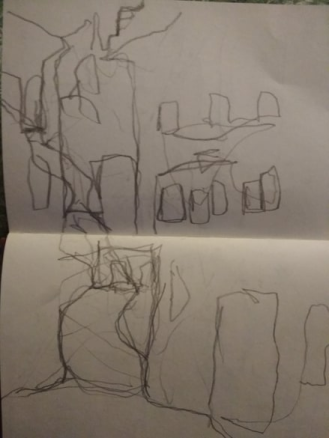 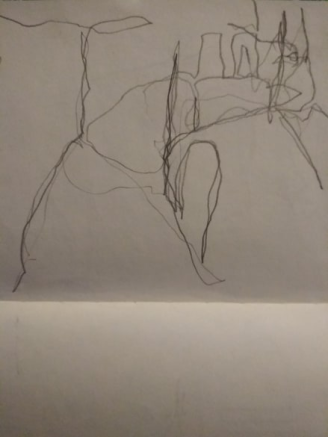 I find very important for a student to escape from the perspective of a certain method, school and country in order to move forward with his education. Therefore I am very glad to take the opportunity to get to know a country with such an historical importance and different art culture and perspective as Italy! I also find very interesting the program of SART which provides a large variety of options in art education. All this in the environment of a city where you are surrounded by art monuments wherever you go! 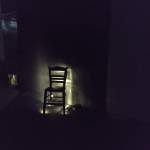 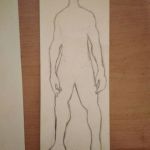 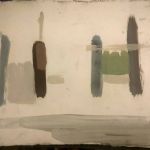 Apostolis is studying at the Siena Art Institute thanks to the generous support of the Stavros Niarchos Foundation.