“I think it pisses God off if you walk by the color purple in a field somewhere and don’t notice it. People think pleasing God is all God cares about. But any fool living in the world can see it always trying to please us back.” –Alice Walker, The Color Purple

The Purple Project focuses on purple in its present day and historical contexts. In my walks in and around Siena I photographed instances of purple that I came across, however few and far between. These forty-four images were taking over a three-week period and are arranged by light and location.

In ancient Rome, purple was the color of royalty, a designator of status. Not only a pretty color, purple was expensive to make and thus deemed for use only by royalty and clergy. Today I find religious and political figures dawned in purple cloaks in Medieval and Renaissance paintings, I find it draped over pulpits in churches, I find it in high-end boutiques. I find it in flowers, in rocks on the beach, and even in trash bags. Not only expensive and hard to create, purple is the least likely color to be found in nature, the hardest color for the eye to discriminate and for this, I find it all the more enticing.

The associations of rarity, elegance and of purple, as famously quoted by Alice Walker, being a gift from God have drawn me to purple in my life and in my travels. The color has a rich history and comes with a range of mind associations, from Prince to romance to feminism to political neutrality to wealthy royals dawned in purple cloaks and I am interested in this incongruity. 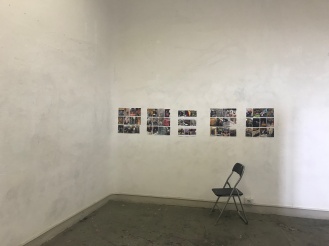 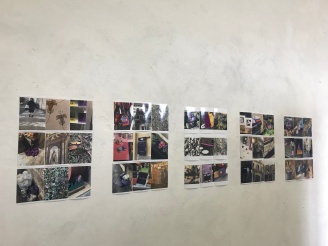 Reading Response to “A New Type of Flaneur Strolls in Search of Humanity“
This artist uses walking through as the means to present their art, thus the viewer must become a sort of flanneur. Perhaps a more astute one who the term was originally intended, an aristocrat going for a stroll. It begs the question, who can stroll in a carefree way and who can’t be carefree maybe even in downtime? I like how the artist chooses things that feel familiar but still are not cohesively one thing, giving the viewer the experience of uncertainty. Instead of the flanneur, who is confident and carefree, the viewer instead has to think about place and home from the point of view of someone who feels fear or uncertainty in a new place. I think it’s a very interesting way of exploring this topic, their work at least seems to be very successful in that way. Specifically this line, “I wanted to figure out which segments belonged to which walk and hoped the artist might appear as a guide in some form but only found myself stranded with the impossible task of orienting myself within the strange place she constructed.”
.
Reading response: “Unstasble Territories” and “Insterstitial Space”
I think we see the world in simple terms, one thing is either this or the other. The term interstitial is interesting because it is trying to name something that is neither here nor there. We have had to create this word because our English vocabulary lacks these ideas but they are important ones. Even reading the longer article(s) where they talked about how borders are not inherently negative struck me because our viewpoint of one side or the other is very strict in our society, and of course we think of borders as highly political and controversial spaces (which I think they are). I think it’s interesting to take a broader look at the value that can come from these sort of forbidden places. I remember reading a piece about Japanese architecture, talking about how in Japanese architecture they will sometimes have sliding doors rather than ones to push or pull so as to not interrupt the space with the door, instead one room flows into the next. That interstitial space becomes part of the room rather than a way to close one room to another.
.
Reading response: Rebecca Solnit:  “The Blue of Distance” & “The Shape of a Walk”
It is interesting to consider how the two chapters are connected. In, “The Blue of Distance” there is the idea of distance and how, if encountered, it loses its magic and value. And then in “The Shape of a Walk” there’s the idea of walking and pilgrimage as both a social and solitary act which also renders distance. The blue of distance is cultivated upon a walking project. The artists discussed, using walking as a subject, channel into something every city dweller knows well. It’s something these artists are exploring that the distance and mysterious aspect of what is out there is intertwined in even a simple everyday act. It gets me thinking about this idea of spaces that are in between but also communal like the sidewalk or city street.
.
Intro Unit Project:  Luoghi di Fuga booklet

For the Luoghi di Fuga project, I wanted to make a booklet that reflected my thoughts on Siena and of existing in transition, in in between spaces. This booklet explores themes of identity and change, linking my past experiences in Italy with those of today. I explore places both real and imaginary in Siena I include a written, drawn, and found collection of reflections on my time in Siena. 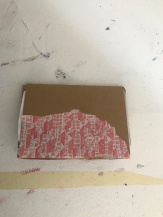 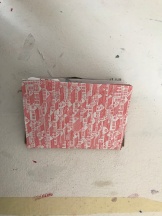 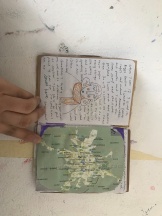 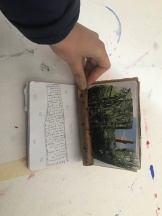 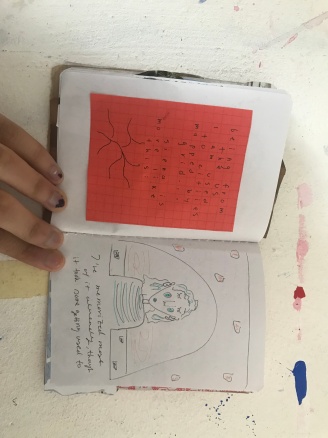 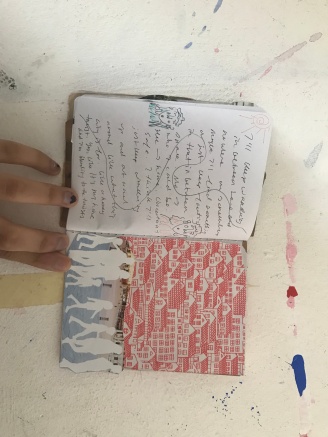 For this project, I chose to make a stone made of a new material.

This project would play with the topographic landscape of the city.

I was interested in the changing of sensation and how this stone could function as a way of transporting someone out of the space they are in, altering the space. The stone would be located on Via di Citta, in front of the Fondazione Accademia Musicale Chigiana. This location is busy by foot traffic but not too busy.

The stone would look almost identical to the surrounding stones, except it would have dark black lines in the middle and be a light color. The stone would be unexpected to step onto, and located towards the side of the street, a few stones from the wall. The center would be filled with a hard plush material and the outer layer would be a thick rubber. More durable than a stuffed animal or a mattress but just as soft. Stepping into it would be a bit like stepping onto a soft tire.

I chose to create the stone like this because I think there comes a sort of rhythm to the walk of the city.  I thought that was an interesting parallel especially next to a music foundation. By stepping onto the stone, the musicality of the city becomes disrupted. Upon encountering the stone, one might even think it was a mistake.

I want to transport the viewer out of the city, into a new environment. By stepping on this stone, even just for a second, One is taken elsewhere. A city as old as city, it’s not often you come across something new. Much like the surprise of finding something unexpected in a new city, this stone would force the viewer to stop and think about their surroundings, and the environment in which they reside. 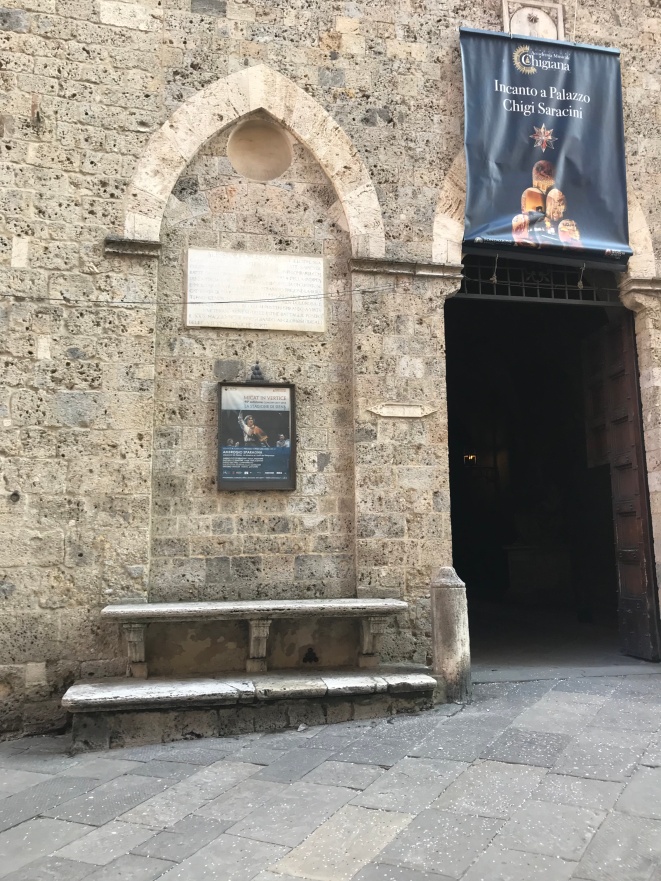 Intro Unit Project: Walk of Destiny
The walk of destiny project took me out of the Piazza del Campo and down path I’d never before seen. My directions landed me at a dead end and so I decided to turn around, and chose the way my course would go next. In a sense, I did not follow my directions perfectly but chose to alter the path which led me to my final destination: behind the Duomo. I was interested in the sensation of following and discovering. On one hand I was following directions but on the other hand I was choosing where I wanted to go. I was also struck by the age of the city, how many people had walked there before I had and how I ended up here of all places. Interested in these ideas of place, destiny and discovery I wrote the poem “A Following/A Cathedral”. In it, the narrator alters their own destiny and finds themselves before something grandiose and much bigger than themselves, much like I did in my Walk of Destiny. The piece explores ideas of destiny, paths, age and memory–both individual and collective. 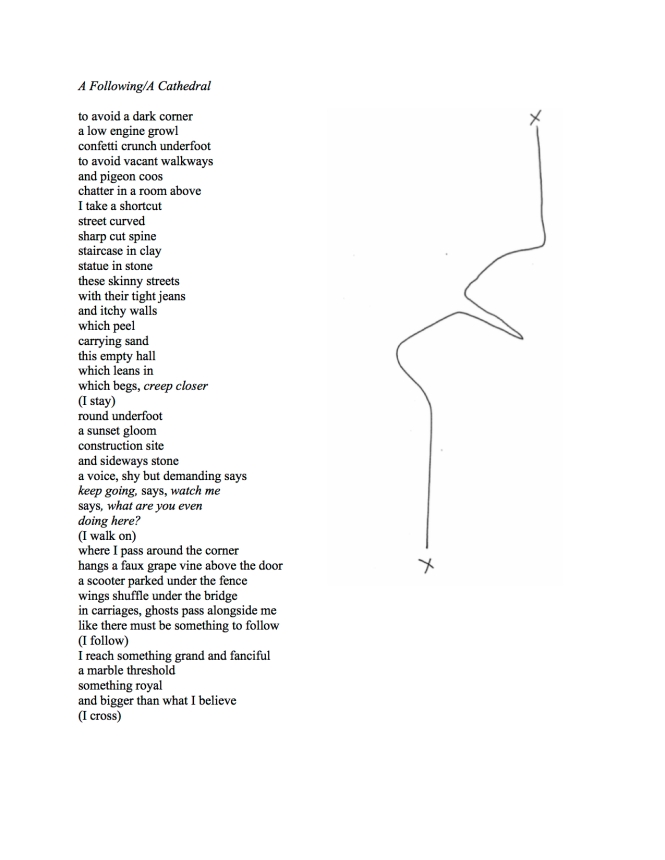 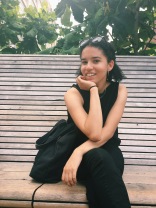 My name is Eliana Carter. I’m from Clinton, New York. I’m a third year at Oberlin College where I study Art History, Creative Writing and Sociology. I work mostly with poetry and short fiction. I’m also interested in radio, and have translated some of my creative projects into podcasts. I’m interested in the different forms a poem or work of fiction can take and hope to explore that here in Siena.