I make works that whisper, not shout. My style is subtle because it takes something familiar just one step further. I largely work within ceramics but am still exploring other media and flexing my creative muscles. New materials and methods often inspire and motivate projects.

My functional-ware aesthetic is minimal as I take care in designing forms and choosing colors. Outside of my functional art, I am driven by what is genuine and this comes through in my work in different extrapolations. I also explore notions of self, oppositions, societal conventions, and connections between micro and macro levels. Coming from a background in gender studies, my work often draws from academic feminist thought.

These works employ the collage format to critique trends. Collages repurpose images, the same way trends repurpose preexisting concepts. These trends reflect how what is fringe becomes mainstream, often for the purpose of capitalization.

☯ and Friends in a Stalemate (Ying + Yang and Friends in a Stalemate)
Siena is famous for its “Palio” horse race that occurs twice a year. Even whilst the Palio is not in session, the Sienese hold strong loyalties to their “contrada”–neighborhood. A contrada is like a sports team… or a gang. Each of the seventeen contradas is named after an animal and has its own colorful flag. This piece emphasizes the physical territories as seen on a map, bringing attention to the borders. The piece is intended for Sienese locals, who are loyal to the familiar animal and colors of their contrada, but perhaps not as familiar with the exact shape of the actual land.
The intention is to distinguish between being merely opinionated (blind loyalty to a contrada) and being informed (aware of the physical manifestation that a contrada literally represents). The mobile format is intended to be both a playful contrast and representation of coexisting enemies, balance, and borders.
While the title hints at the element of balance, it also challenges the idea that balance is peaceful. The ying-yang symbol typically connotes peace and balance. I wanted to represent the idea that balance can also exist as a byproduct of conflicting forces. The title serves to imply the essential role of opposing enemies, for what is a hero without a villain? 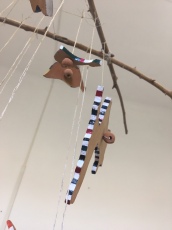 Reading Response to “The Secrets of the Wave Pilots“

We hear all the time that technology makes us disconnected from one another but the Marshall Island sailors prove that the real loss is that we are disconnected from the world. The ancient navigation technique originating in the Marshall Islands proves the human body has the amazing capacity of “GPS” once it’s in sync with its surroundings. It sounds hippy dippy that a person could harness awareness and being present to read the waves but the reality is that other species use cues from the world around them to navigate.
Neuroscientists John O’Keefe, Edvard Moser, and May-Britt Moser found that humans supposedly have a inner GPS… so the problem now is, how do we plug into it? While much of this conversation surround the loss of this knowledge and need to regain it, it overlooks the fact that when this inner GPS is overused, other areas suffer: Neuroscientist Eleanor Maguire found that London taxi drivers that overused their inner GPS and hippocampuses changed the size of the hippocampus so that the taxi drivers were worse at other memory tasks (even after they retired). If this is the case, could it be that the parts of our brains that function for inner GPS are or will be used for other capabilities in the future? Perhaps we are simply in transition, adapting.
It’s hard to say as inner GPS is a survival tactic that many of us will never have to use. Yet if the day were to come to use it, disorientation could mean death.
.
Reading Response: “Unstable Territories”
I typically think of boundaries and borders as isolating markers of separation. What this mindset overlooks is the possibility to reimagine boundaries as “places of encounter,” as James Bradburne does. Walter Guadagnini extrapolates upon this to point out that “a border exists in order that it may be crossed… overcome.” In short, “rules are meant to be broken?”
While we think of boundaries as innately fixed and impermeable, the reality is that natural boundaries exist to allow for exchange: on the cellular level, boundaries exists to facilitate diffusion and osmosis. Each cell may be individual, but the boundaries between cells exist in order to encourage all cells to cooperate on a larger scale, for the organism. If this is the case for physical boundaries, how can communities and nations function both locally in order to serve a more global initiative? If this is applicable other genres, how can understanding two different perspectives synergize into a interdisciplinary approach?
.
Reading Response:Rebecca Solnit: “The Shape of a Walk” and “The Blue of Distance”:
Rebecca Solnit’s analysis of walking is interesting in that it sees such a simple act as a means of rebellion in the modern industrialized tech age. Solnit also claims that walking is an art for those following Allan Kaprow: “art ceased to be a craft-based discipline of making objects and become a kind of unbounded investigation into the relationship between ideas, acts, and the material world.” In The Blue of Distance, Solnit similarly focuses on the “walk” rather than a destination when she discusses the phenomenon of seeing a beautiful blue along the distant horizon but seeing none of this blueness upon actually reaching the destination.
This concept of an impossible and unachievable “blue” is rather depressing. We desperately seek to get as close to (in order to obtain?) beautiful things and this blue Solnit discusses it forever out of reach. It is reminiscent of artist Ettore Pinelli’s pieces at the SpazioSiena gallery’s Sulla Pittura, in which the images of violences are fuzzily visible from a distance. The figures exist like smoke from a fire, enticing you in to have a closer look. As you step closer, the figures actually become less visible and you are left looking at nothing but more abstract soft colors. Like with the blue Solnit discusses, some things can only be appreciated in one way: “I tried to cut away a small cluster of the pale brown roses to take with me, they immediately became less beautiful.” If this is the case for many things in life, is art a less beautiful rose? Or the only way to take ownership of the blue of the horizon that is always out of reach? Does it suffice?
.
Intro Unit Project: Luoghi di Fuga booklet:
Personal Place
This piece was a reimagining of places. We typically think of locations as fixed and tangible. I wanted to convey the ability to create personal space in any place. While books are typically on a bookshelf or surface, this booklet hangs in a doorway. It literally creates its own space. The earplugs on the cover hint to the contents of the book: earplugs function to control the wearer’s surroundings without infringing on anyone else’s existence. The pages that follow contain objects that personally allow me to create comfort and familiarity, regardless of the physical location. 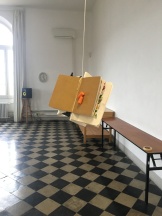 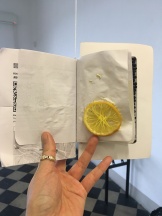 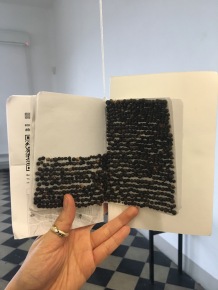 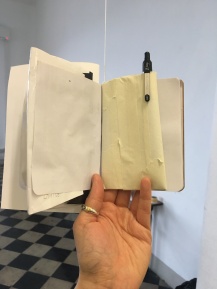 There is a pen that explicitly serves to allow the viewer to write in it. I don’t have a desire for anyone to change the contents of the book, but I think it’s important that the opportunity exists. This book represents a place and the ownership of any place is disputable. When considering the political climate around immigration and histories of colonization, it becomes clear that it is difficult to claim something: Is the book mine because I’ve filled all its pages? Would it still be mine with one speck of a mark in it? What if the mark were erased? If someone were to write in its pages, at what point does it stop being mine?
.
Intro Unit Project: Tempo Zulu
Fountain, Interrupted
This project was about influencing a space in a subtle way. I chose to incorporate the coriandoli because it is a “natural” part of the environment, sprinkled across all the streets, during carnival time. The goal was to use the coriandoli in a deliberate way different from the trajectory of the same confetti thrown around in careless fistfuls by the children of Siena. The intention was for the careful arrangement and the supplemental use of sparkly sequins to bring attention to the fountains. I chose these two contrada fountains (eagle and tartuca) to draw a relationship to the two neighboring contradas, inviting any viewers to wonder why the two are connected; I live in the eagle contrada and the school is in the tartuca contrada. I didn’t have a specific result in mind but the final product was placed at the cusp of Saturday night and Sunday morning, only to be gone by noon: a mere interruption on each of the fountain’s normal states. 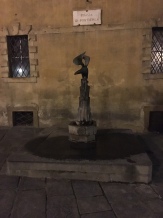 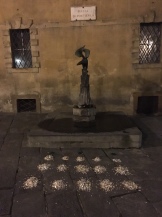 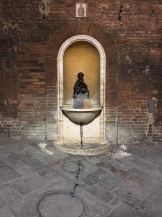 Intro Unit Project: Walk of Destiny
There are endless pairs of opposing words. Sometimes a hierarchy is obvious: good+evil. Sometimes less so: hot+cold. In the “Walk of Destiny” assignment, our opposing pair: left+right. We followed a randomly preselected series of lefts and rights from the central Piazza del Campo to our destined location. The hierarchical relationship between left and right is unclear (except that it’s “left or right” and not “right or left,” like it is “him or her” and never “her or him”). Yet as I began my walk, I found a preference for one direction over the other. I had started my walk mindful, noticing a lingering scent of rubber from a construction site and voices of strangers walking parallel and perpendicular streets. The frazzled worry that I was heading towards a street I had already been on, or—God forbid—back to the Piazza, soon replaced any other observations. I wanted to express this aspect of the journey: the discovery that left and right are in fact not equal opposites. The resulting sketch is simple. I started filling half the page with lines moving right—left to right. I tried to reach the end of the page without going over the end, as it’s the tail of a line that really indicates the direction of the stroke. To oppose each right-stroke, I drew a series of left-strokes, drawing right to left. This experience was completely different from the right-strokes, very unnatural. The mundane finished product hides the difference. While a “Walk of Destiny” sounds like it should be exciting, perhaps it is actually ending right back where you started—boring, nothing special—that exemplifies being “destined” to be. 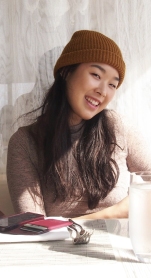 Hello! My name is Unu. I graduated from the University of California – Los Angeles with a major in Gender Studies. Feminism has become a compass I use in everyday life but I’ve since decided to study ceramics. I have no formal background in fine art and am still exploring my relationship with it. It’s been a humbling experience. While I’m currently more interested in functional ware and would like to cement my skills on the wheel, I hope to also experiment with sculptural ideas in order to capture my educational background in Gender Studies.