Images from the end-of-semester exhibition (Dec 2014)

The construction of a cluster by the repetitive use of a unit permits the analysis of concepts, such as boundary and territory. The areas which are created between the boundaries of each unit determine the internal organization of the sum.

The mutual dimensions of the units delimit the empty space. The contrast between the regularity of the orthogonal grid to the variety of the heights permits the perception of a single form without focusing on the unit. The combination of two maps, one of Thessaloniki and the other of Siena, gives us the opportunity to observe two different landscapes as a common complex.

Finalized structures for collaborative installation “Today is Tomorrow: The Future of Colle” at the Archeological Museum of Colle di Val d’Elsa.

Work-in-progress, collaborative installation “Today is Tomorrow: The Future of Colle”

Oct 13, 2014:  Project Statement, “Today is Tomorrow: The Future of Colle” (in collaboration with Antonis Tasoulis)

A structure that individual parts-points could create a solid surface and have the ability to effect it then. A board is used as “level zero” to record this change. 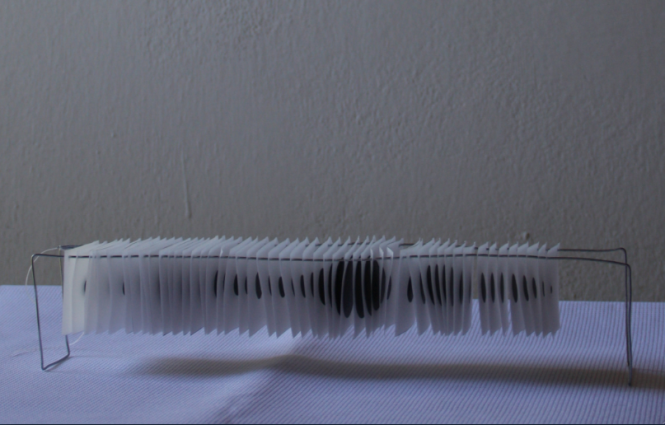 Representation and the example of Photolife

The individual comes in touch with symbols and different kinds of representations from his fetal age, has the ability of thinking of an idea in multiple ways and is capable of representing a single object by different approaches. Modern western civilization is grounded on principals, like the value of the image and the representative process, the difference between signifier and signified (or the difference between the meaning and the referent object). From the one side we can distinguish the reality and from the other side the meanings, that can be considered as components of the reality and not as additional elements.

Photographic images conventionalize the visible: grounded on the visible and connecting every event with its spatial-temporal framework . By the technique of “Photolife,” Wafa Hourani combines the photographic medium with models or objects of everyday life and takes advantage of the power that photos have, to depict the matter and charge it with different meanings. With the correct use of collaging and modeling he achieves to balance between the realistic representation that photos provide and the abstraction of a fictional space.  We can make an hypothesis for the connection of the Muslim perception of depiction and the aniconic representations with his search for life. Tales are used to fulfill this search and minimize the real. The scale of the artwork enables the artist to represent situations, political, social or historic facts, without being narrative. The viewer observes and plays without the demand of tangling himself with the “real” user-inhabitant. Also the use of different medias (image, sound, light, movement or even life) offer small features to the installation, resulting in the construction of a new micro-reality without the sense of the main one. Baudrillard  refers to the necessity of the representational procedure even for fictional objectives. “For something to be meaningful, there has to be a scene, and for there to be a scene, there has to be an illusion, a minimum of the real, which carries you off seduces or revolts you”.

To be convinced a human has to create a secondary reality with the means that the general one is constructed of. The idea that we have for every object is made from the human logic, doesn’t preexist but underlies in  the nature of everything.  This process of connecting the object with an information that we have experienced or we identify as general truths is almost a necessary form of resistance at a time when representation consists in a cognitive tool,  and the risk of confusing or neutralizing the reality with its “reflection” is more than profound.

=======================
Influenced by the way situations international blend a science like geography with a subjective view, I experiment on a very common “found object” of the city. Based on a roof tile, I make its map analysing the texture that the object has obtained using a digital process. Then  I try to find how could the real object be paired with its representation.

Situationist International and the Example of Siena

The period during the end of 50’s and the beginning of 60’s, European urbanization was accelerated. The phenomenon of “villes nouvelles” in Paris appeared, and as a result created cities based on totally new models of urban design. This acceleration of the civil modernization formed the tactics of “situationist international”. A movement that concentrated in the homogenization of the society through the process of civilization and medias.

By “constructing” different types of situations and with a childish approach to architecture, the creation of the Situationist International in 1957 had as an intention, to displace the conventional art and import it in the everyday life. Using psychogeography they tried to focus on the subjective factor in an applied science that can be used to describe matters such as space, community, weather-climate conditions or political and economic structures. We easily can detect the factor of the subjective assimilation and criticism in the process of depiction. For the cognitive theories, learning is not a process and result of dependence, but a result of active interpretation of information based on the intermediate cognitive processes of the individual. These are interpolated between the cognitive environment and the reactions of the human being. In other words, learning and assimilating are processes of editing knowledge that already existed. As a result, Situationists considering that science isn’t able to give any answers to human problems without the mediation of evaluative and civil critique, favored the intermediate part of the personal editing, and depicted the eventuality that exists in the process of understanding the objective truth.

During the above-mentioned decades architecture became a means of study and experimentation. Ideas like the moving-expandable city instead of a frozen one, have obviously influenced the modern society. The need of “prefabricated” events in the everyday life, the interrelationship between the personal opinion in the subjective reality or the development of critical awareness concerning political, economical and social actions, acquire bases in the modern life. We could speculate that actions in the modern urban space by small teams, established their principals following this kind of perception. Designing a series of symbols on sidewalks and walls to show where there is wireless internet accesses (warchalking) is an example that allows users-citizens to take advantage of the free connectivity in town.

In the example of a historic city as Siena, the theory of unitary urbanism (a strategy that was firstly used from the situationists) is profound. Thanks to the core of the historic city and the events that the local community (due to its timeless role) coordinates and gives meaning to the entire city. The human factor creates and reforms the meaning of the ancient surroundings. Its creations consolidate the natives and restores the primacy of the street. The situations of everyday life shape the relationship between the civilian and the town center in a modern base. Elements of historic criticism may be apparent to whomever indulges contemporary motives.

The built space of the city separates the public, the semi-public and the private space. Playing with these territories and their boundaries in a part of Siena’s civic map, we conjecture rules for them and develop new urban forms using only the existent one.a.  firstly by multiplying the boundaries in the same pubic space, the scale of the private buildings are coming closer to the human
b. then, we maintain only the limits from the public space. The territories remain separate however the transition is clearly easier
c.  in the existent form the public space is created by the decisions  of individuals for their private territory
d.  finally we invert the territories. The boundaries remain the same but the action in them could create totally new behavior.

According to Gilles Deleuz space, and its representation can take three forms:

i. One big or more smaller vases, that they ‘ve been formed by their limits,

ii. A seamless, infinite total, that many movements pass throw it,

iii. A continuous and articulate complex of passages, that every join of them separates and divides the initial total

Gradually we can follow the bidirectional connection between a territory and its limits. A territory regardless its form ( physical,  fictional,  spacial or social ) by the use of district boundaries can get compact and concentrated or reformed. “Without otherness, the presence of a system of exclusion and inclusion like the one provided by the limit has  no reason to exist.”1   By defining in space two different restricted areas, each of them gains determinative skills for the other one. By examining them at the same time, we can make conclusions concerning their function, their scale, their form and their dynamic. Each, can be defined differently by the elements of the other whether,  they are common (a), partially common (b,c) or even different (d).

In a smaller scale these comments can become understood by the interaction of our private spaces into a common ground. A person, continuously has to act and react into the public space with the others, to define and reshape his personal boundaries (a,b,c,d).  The sex, the age, the size, the social background and the personality of the subject execute a major role. By these movements, he may understand his self, cover his needs, coincide with other people that have common goals, and come in touch with values stronger than personal bias.

In a bigger scale these associations can be identified as the interrelationships between groups of people, countries or even continents. The physical boundaries transform into social, moral, technological, and the opposite. Bipolar definitions such as, “exclusion – inclusion”, “being – belonging”, and “movement – stagnation” gain multiple meanings, according the time, the context, the history and the interests of the association without abolishing the underlying motivations of every unit. 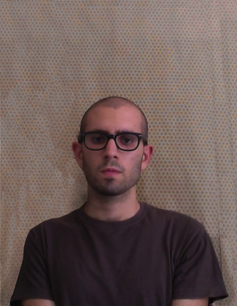 Born in the city of Chania, Crete, Greece in 1993, from his first years he navigated under different professors, coming in touch with the arts of painting, sculpture, and architectural drawing.  The last three years he studied in the School of Architecture of Aristotle University of Thessaloniki.  Through this period he co-works in different studios and architectural competitions with renowned academics such as Costas Varotsos, Tasos Kotsiopoulos, Dimitris Fragkos and Dimitris Xonoglou.

His synthetic procedure based on the senses of transition, time, and the meaning of materials, aims to provoke new forms of experiential space.

The participation of Greek students in the Siena Art Institute‘s Fall 2014 semester is made possible thanks to the generous support of the Stavros Niarchos Foundation.

One thought on “Giorgos Apostolopoulos, Greece”